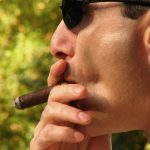 Cigar smokers face a dilemma when it comes to finding a term life policy that is appropriate for their needs. Cigars are not cigarettes and many individuals do not consider it smoking to enjoy a cigar on occasion. The problem is that life insurance will ask about smoking and runs a urine test to determine if the body has any nicotine in the system before issuing any type of policy. In many cases, cigar smokers will find that the companies have stringent requirements to qualify as a non-smoker when using cigars instead of cigarettes.

Smoking cigars on a regular basis is considered smoking by many term life insurance companies. Determining the number of cigars that is considered smoking on a regular basis depends on the particular company. Most companies will not count the celebratory cigar, such as when a baby is born or on a wedding. They will, however, count cigars as smoking if it exceeds a set limitation. This is done by testing for nicotine in your urine during the medical exam. If there is no nicotine shown in the specimen companies, such as Prudential Life, will issue non-smoker rates. If you are in perfect otherwise, you are still eligible for their Preferred Best rate. Not only companies follow Prudential for this, they all have their own guidelines and limits.

Limitations vary between companies and some term life insurance policies will not offer the best rates to cigar smokers at all. The best rates are usually reserved for those who are non-smokers and who have excellent health during a test.

The reason that smoking cigars on a regular basis is considered risky is the amount of tobacco in a single cigar. Premium and high quality cigars can contain as much tobacco as a pack of cigarettes. Since this poses a health risk, the term life insurance companies consider cigar smokers as a slighter high risk individual even if he or she is otherwise in perfect health.

Smoking cigars on a regular basis can result in similar ailments as cigarette, pipe tobacco and chewing tobacco. Smokers are known to face a wide range of cancers, even if it was not cigarettes. The good news is the rate is not set in stone. If you are issued a smoker rate due to your nicotine levels, and you quit smoking cigars there are ways to lower your rate for a cheaper price. Say you purchase a $100,000 10 year term life insurance policy at age 45 and you are issued the smoker rate of $334.00/year. If two years down the road you quit smoking altogether you can now qualify for the non-smoker rate of 47 year old man which would be $164.13/year. The more coverage you purchase the higher the costs. If that same 45 year old smoker purchased a million dollar life insurance policy it would cost over $2,000.00. If in 2 years that person quit and could qualify for the non-smoker rate, 1 million dollars of life coverage would only cost $910.00. (please note these were sample quotes using Protective Life Insurance and are not binding).

Despite the risks, some insurance companies do make allowances for celebratory cigars. This provides hope for those occasional smokers who are not regularly enjoying a cigar.

The limited cigar usage depends on the particular company. Some term life insurance companies will allow the occasional cigar, often with a set limitation on who qualifies for the best non-smokers rates.

A common qualification for non-smokers rates when enjoying an occasional cigar in celebration of a birth, wedding or similar special occasion is that the habit should not exceed 12 cigars in a year. This means one cigar a month as part of a celebration.

Companies that allow more than the once-a-month cigar have a secondary rate rather than the best rate available. The rate applies to those who smoke one cigar a week or less throughout the year. The individual is still considered a smoker, but the premium rate for good health applies, which is much lower than regular smoker’s rates.

Beyond the limitation on the number of cigars, which varies by company, many term life insurance policies also require a test for nicotine. The nicotine test ensures that the individual is telling the truth about cigar usage and that he or she is an occasional smoker rather than a regular smoker.

Few term life insurance policies offer the best rates to cigar smokers. Some companies will consider any cigar smoking, even celebratory and occasional cigars, as smoking. As a result, cigar smokers can expect higher rates than the best non-smokers rates in most situations.

While many term life companies will consider cigars in the same category as cigarettes, others cater to those who occasionally smoke a cigar. These companies do not usually offer the best non-smoker rates, but do have a separate category for cigar smokers that is better than the rates offered to regular cigarette smokers. If you have any medical conditions such as asthma or sleep apnea that may be negatively effected by your smoking they may not qualify you for non-smoker rates. Even in the scenario they do, a flat fee premium may still be added to your policy due to the fact you are raising the rate of complication with your medical condition by smoking.

The cigar smoker rates are usually a mid-ranged expense for term life insurance. The individual is not considered a non-smoker, but might be able to obtain the second-best rates for good health and limited smoking.

Consistent cigar smoking will result in the same high rate as regular cigarette smoking. Smokers will obtain much higher rates as a direct result of the higher risk to health in the future.

Insurance for cigar smokers is not always a smoker’s rate. As a result, it is important to determine whether an individual is considered a smoker or a non-smoker before applying. The rates will vary depending on the length of the policy. If you have plans to quit, or do quit, you should consider locking in your rate for a longer period of time such as 20 years or 30 years.

As a general rule, non-smokers must not have smoked within the last three years. Some companies make allowances for occasional cigars, but do not make any allowances for cigarettes. Exact requirements and definitions are usually laid out in the insurance data.

Cigar smokers are in an unusual position when it comes to life insurance. They are not always considered a smoker, but some companies will consider even a single cigar in a year at the smoker’s rate. The key is searching for companies that allow celebratory cigars at the non-smoker’s rate.

Mozdex Insurance Advisors have helped thousands of families secure their futures with proper insurance planning since 1997.